Posted by gluejar on July 23, 2014 in Meet the rights holders

Pro tip for authors: don’t kill off your heroes on page one, then destroy heaven and earth 3 ways before page 150 in the first book of a series. Unless, of course, you happen to have the talent and imagination to pull off something that audacious. 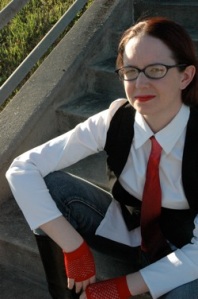 Which is what Mur Lafferty does successfully in Heaven, the first book in her “Afterlife” series, now available as a Creative Commons licensed ebook on Unglue.it (CC BY-NC-SA). The first 5 books in the series are all available; “Thanks for Ungluing” contributions for these books will help Mur keep the lights on while she finishes the sixth book in the series, entitled “Stones”.

Lafferty has earned a large audience as a podcaster. She has a voice you could listen to all day, whether she’d interviewing writers for Angry Robots Books or discussing the craft of writing on “I Should Be Writing“. Her daughter seems to have inherited some of this talent- she occasionally does a podcast called Princess Scientist’s Book Club.

I was a bit apprehensive about listening to the podcasts though. Lafferty’s writing voice is so original and funny that I worried her speaking voice would clash with the voice I heard in my head when I read Heaven. My fears were unfounded.

For example, “Listen” to this description:

I was sad about losing Daniel, but not as if we’d broken up. It was kind of like putting down a bag of potato chips when you knew they were empty calories, no matter how good they tasted.

You can just hear her, can’t you?

The Afterlife series doesn’t fit well into conventional genres, though I’m sure publishers have some cute name for it. It’s not science fiction or fantasy, it’s not really speculative fiction. It’s not romance either, or historical fiction, but it has elements of all of these. I’d call it crossover imaginative fiction. I wonder if that’s a real category. Whatever, I enjoyed it. Or, as much as it’s possible to enjoy an eschatological romcom.

Lafferty’s audacity as a writer carries over into a willingness to experiment with new business models. You can support her podcast through Patreon, and she’s funded the Afterlife series through Kickstarter. So you can imagine how thrilled we are to have her participating in Unglue.it.

We don’t yet have a way to support a group of books with a single credit card charge (it’s a story on our development tracker) but it’s better for Mur if you do one big thank you instead of 5 small one. Because she deserves a big Thanks.